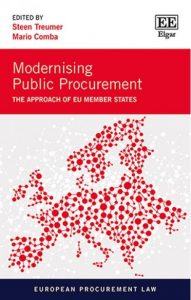 Modernising Public Procurement. The Approach of EU Member States, a new book with contributions by many EPLG members, is on pre-order now!

The book can be pre-ordered at https://www.e-elgar.com/shop/modernising-public-procurement, with an online 20% discount.

Here is a flyer, available for circulation.

Here is some more information:

This topical book offers an in-depth analysis of the recent implementation of the Public Procurement Directive, based on the experiences of 12 Member States including France, Germany, Italy, Poland, Spain and the United Kingdom.

And here is some critical acclaim

‘Modernising Public Procurement offers a privileged view about the implementation of Public Procurement Directives of 2014 in several member States. The authors are outstanding scholars and experts, often involved in the process of implementation due to their institutional roles. The book is an essential tool both for scholars and practitioners, as well as for judges. It fruitfully combines a national, comparative and European approach and offers the reader a rich and comprehensive perspective on the topic.’
– Marta Cartabia, Italian Constitutional Court

‘Modernising Public Procurement offers a most interesting perspective on the new Public Procurement Directive (2014/24/EU) by describing and analysing the different legislative choices made by different EU Member States when implementing the directive in their national legislation, with a particular focus on some of the new substantial rules of great practical importance.’
– Nikolaj Aarø-Hansen, Judge, Chairman/President of the Danish Complaints Board for Public Procurement, Denmark

‘This work highlights with success problematic issues in the implementation of the most important Public Procurement Directive. A well-structured comparative law approach binds together the 12 national chapters on implementation in as many Member States. In my view, the editors have succeeded in drawing up relevant conclusions and giving guidance on how to develop best practices.’
– Jesper Svenningsen, Judge, General Court of the European Union